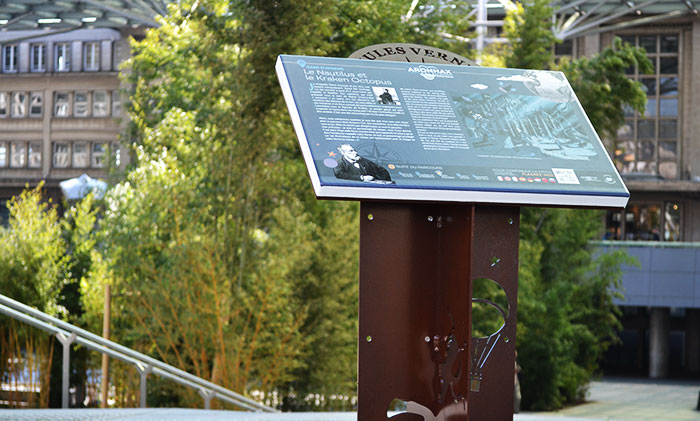 To mark the 100th anniversary of Jules Verne’s passing, we developed enamelled lava stone signage for the city of Amiens dedicated to the writer’s work.

To meet our customer’s requirements, our design office undertook a feasibility study on the design of standing interpretation panels made from enamelled lava stone on a corten steel base. From researching the design of the panel bases to designing the graphics for the decorative elements, our experts worked closely together to create attractive and durable products. Using the technical plans developed by our design office, our steel-working specialist company, Atech, created the corten steel base for the panels via a specific laser cutting process. Lastly, our electronics division also had a hand in the project, delivering an interactive display totem. Our installation team at the Amiens office set up the finished products, which were unveiled to the public at the late March inauguration.

Enamel, a material to stand the test of time

Being resistant to wear, harsh chemical and environmental stresses and fire, enamelled lava stone is particularly well suited for the design of furniture and works of art designed for public spaces.

A century of expertise

Enamel work has been a major part of the Signaux Girod group’s activity since its founding in 1905. In the early part of the century, the name Girod could be found on headstones, clock faces, house numbers and street signs. Today, Girod is active on the signage market for RATP stations, logos and cultural, recreational and tourist markers.